The Data Center feature allows for a simplified import of data from files (Excel, .csv, and .slg) or from various databases without writing a line of code. Based on the structure of the data table, you can interactively select the parts of the table which should be imported and map the columns (or rows) of the table to the corresponding attributes defined in the metamodel. This makes the Data Center a very flexible tool for importing data from multiple sources into Soley Studio. This article gives you a quick step by step guide on how to import data using the Data Center feature.

The basic process of the data center is as follows:

The Data Center will soon replace the Data Import Dialog. For the transition phase, we keep both options active.

A data source defines a file or database that you want to import from. To add a new data source to your project, go to the top menu tool bar and click on the icon “Add New Data Source…”.

Now, the “Select data connection” dialog pops up, in which you can select the data source. This can be an .xlsx, .csv, .slg file, a database, a PLM/ERP/CRM system or an online service. Some of the interfaces are currently under development, some are extra add-ons. Select an entry from the list and click on Connect.

Select the icon “Add New Import Step…” in the top menu tool bar. This will open up a dialog window showing all data sources you added. Select the source you want to import data from and click OK.

In the appearing window, you can define the details of the import, i.e. pick a worksheet, select the node class to be instantiated and map the attributes to the columns. Let us have a look at an example.

We want to import data from an Excel file and already added the data source as described in step 1. After clicking “Add New Import Step…” the following dialog window appears. 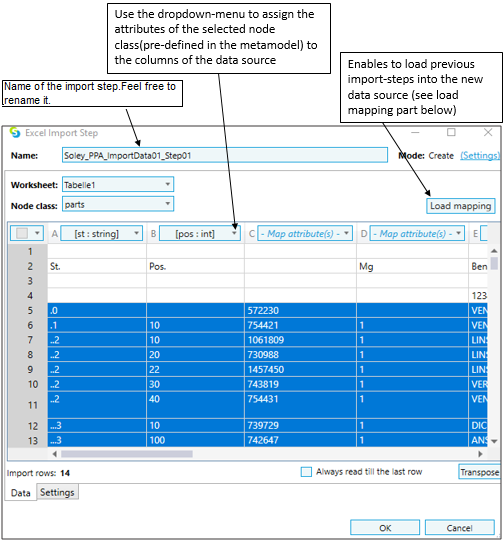 In any case, a new *.slis file is created automatically and attached to the selected data source in the Solution Explorer. In our example, it is attached to the file “Soley_PPA_ImportData01.slds”. To edit the Import Step you may open the *.slis file.

The load-mapping button is useful when you have two or more similar files that you want to import. By similar is meant order of columns and attributes. All you have to do is create the metamodel once for the first file (node class, attributes and area to map) and then open your second file and load the mapping of the first one, which means selecting the import-step of the first file.

By clicking Ok, a new subfolder “Import Sequences” is added automatically to the folder “Data Center”. This folder contains all import sequences (*.slim files) you defined.

Right-click on the *.slim file in the folder “Import Sequences” and select “Run Import Sequence”. By default, this will open up a new graph file and carries out all the import steps contained in the sequence. If you want to import your data into an existing graph, open the graph file (.slg) in advance.

If you run an import sequence while a graph file is open, you can chose whether you want to import the node instances to the existing graph or not (and therefore create a new graph).

The Data Center is a new feature we are currently working on. Upcoming improvements include usability, UI and ways to call import sequences within sequences and workflows. We will update this article as soon as the improvements are available.