It is a common task to query your graph for certain elements. This can easily be done using the interactive Smart Selector tool. However, you might want to include a query in a rule, in a sequence or in a workflow. This article will show an example how to realize this task.

First we create a rule that looks for graph elements that match our query term. In the following example the search term is of the primitive type string and the rule looks for nodes that contain the search term either in their id property or in their name property. If a match is found a line of text is emitted to the Output Pad.

By using the string operation indexOf the search term does not need to match the id or name property but only needs to be contained to result in a match.

By using the string operation toLower for the search term and the properties the query term becomes case-insensitive.

To create a query workflow, where a user can enter a search term as workflow argument and then click on run to retrieve all answers that match the term, we need to proceed as follows.

After building the project and selecting the workflow in the Workflow Launcher Pad you will see an argument field that can be used to enter a query term, as shown in this image: 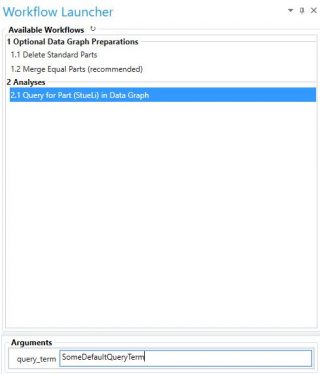 Et voilá, you have created a workflow that allows a user to run a query on a data graph. You can, of course, make this more advanced, e.g. to reduce a data graph to only those elements that match your query, etc. .