The layout of a graph in a graph view can be changed using either the icons on the left side of the canvas or the drop-down menu called “Layout Graph” in the toolbar of Soley Studio. Following basic layouts are available:

Using the Layout Graph menu in the toolbar 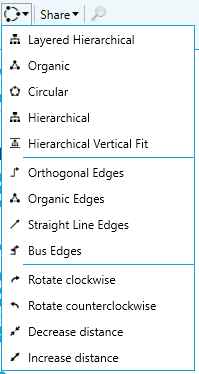 With a graph view open, go to the toolbar on the top and open the Layout Graph drop-down menu. In there, choose the layout that you want and it will be immediately applied to your graph. The default layout is Organic, as it is the least computationally expensive
The hierarchical layout is the most computationally expensive and can take a few seconds to process. It is therefore not recommended to use the hierarchical layout, especially for big graphs with several thousand edges or nodes. We are working on improving the performance.
A special case is the layered hierarchical layout, as described next.

3. You can use the up/down buttons or drag-and-drop to re-order the data sets. When applying the layered hierarchical layout, the first layer is on the top, the second layer below the first and so on.

4. Press “OK” to close the configuration dialog. The layout of the open graph view will be adapted according to your settings.

The layer assignment happens sequentially and only for nodes that are not assigned to a layer yet. That means that if the same node is part of two sets the first set in the list will define the layer of the node. As an example consider this:

Further, it is currently not possible to define the same layer for two data sets, but we want to add this feature in the future.